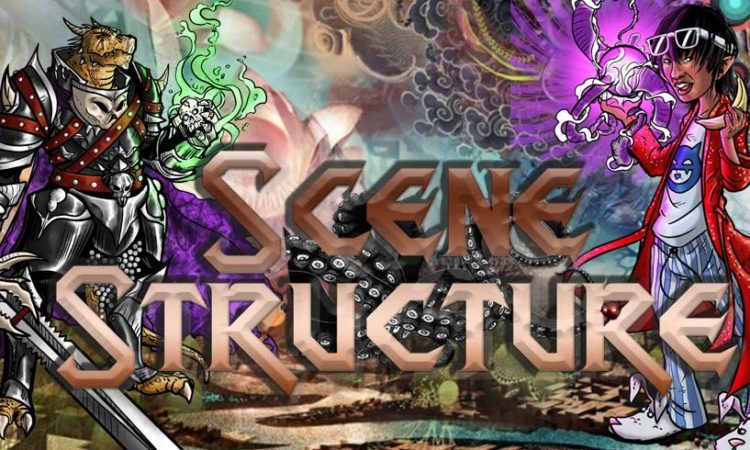 Hey fam, writing peeps in the future who may stumble across this article as they’re likely procrastinating working on their novel, or maybe, they’ve tucked aside some time for learning and planning and have come here in hopes of learning something. This is the first article on my blog that I’m posting as “writing tips,” and I’m no expert but I have put in a fair amount of time trying to achieve that credential or expertise.

After a four year degree in English Literature and Creative Writing (poetry and fiction), graduate studies, a program for world building and game writing, master classes with some of the world’s best living authors, countless (Dozens) of books on story and structure, and thousands and thousands of novels consumed over three decades as an avid reader, I feel I know a good structure and good writing when I see it. The problem is navigating the vast learning curve between what we can recognize as incredible writing and how our own words come out on the page when we finally get our butts in the chair long enough to try to say something.

Stephen King, in “on writing” (an interesting memoir, with a dozen or so pages of “tips” at the end, but interesting nonetheless. I grew up eating Stephen King novels for breakfast, lunch, and dinner!) discussed an idea that I love, that writing is magic. You are projecting your thoughts, your voice, via telepathy and time travel, like an android, with the aid of technology into the future and speaking in the minds of potentially untold millions – for the greatest wizards, long, long after your death. Wow, pretty intense, isn’t it? I think on some level that is some of the appeals of being a writer. But, like any good wizard, you should expect to spend years training practicing and improving.

After years of free writing and abandoning projects, this current generation of web tools and a digital community has made all the difference for me to finish books, and already I see a vast improvement in the quality of my writing due to them.  The biggest thing that I can advise an emerging writer who wants to take on a huge novel project – to avoid toiling for years only to find the book didn’t work out is to outline.

If, in the process of writing you get new, more profound ideas, go ahead and deviate. Add, subtract, modify, but at the end, you will have a skeleton that makes sense and allows you to focus on the small details, scene by scene, that make the story work.

Instead of writing a book for five years to find out you didn’t like it, you can spend a month working on an outline and see whether you think the story works – or doesn’t – and save yourself years of grief if it doesn’t.

The best books I can recommend to understand the grand story arc would be the ultimate classic, Aristotle’s Poetics, or Robert McKee’s “Story,” which is meant for screenwriters in particular but discusses how to capture a great story, from macro to micro, beat by beat. Another huge one – that inspired George Lucas was “Hero with a 1000 faces” by Joseph Campbell. If you can tap into monomyths and the stories that have reverberated throughout the history of humanity, well, you might have something with a universal element that readers can love.

The main milestones you’ve got to hit to make a great story (in any medium) happen, are generally as follows, although some can be moved around a bit to your heart’s content:

Each of these milestone scenes is worthy of a blog post to explain and dig into how they operate and work together to build a scene. If you’re missing one or more, there’s a good chance your story might fall flat. Go ahead, google them and dig in – the knowledge is out there.

The focus of this blog post will be to discuss individual scene structure and share an exciting tool to help you hit the right notes of each scene. 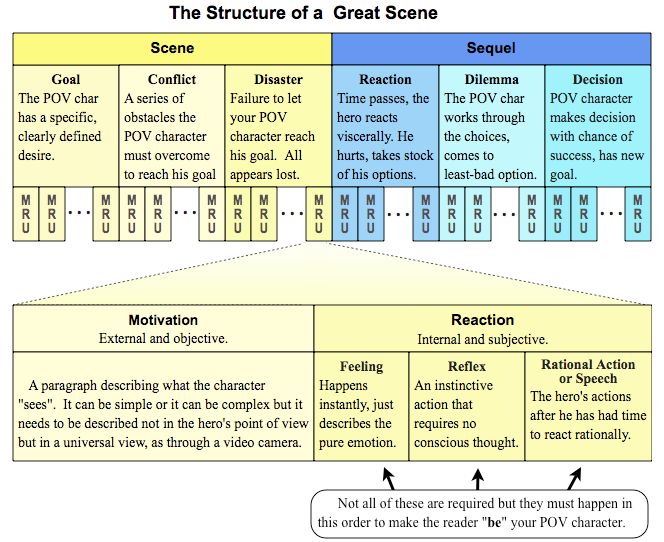 I’m not 100% sure where I found this. I didn’t make it, but I collected in like you are probably doing right now, in a binder, or digital folder, or printed it out and put it on a cork board and read it again and again. But if you’re like I was, your eyes probably glaze over a little bit, and you think “great, a great scene is made up of… numerous moving parts …all interrelating, and somehow, it’s complicated.” Yes and no.

I wanted to show you how you could build a great scene, with rising tension and a great cliffhanger/page turner, by plugging your story into a structure like this and using it to develop the scene.

This morning I sat down to work on my current novel project Amos the Amazing, and introduce a new character in Part 1. She’s going to make a grand escape from her palace, and find her way into an exciting world of danger. Along the way, you’ll learn a bit about her compelling backstory – how an ancient elven ritual reincarnated her after she was murdered but brought back in a younger form and now she’s a bit of a bratty teenager which suits the demographic for a YA magic/fantasy novel on the nose. Let’s dive into how her introduction scene could work:

Structure of a Great Scene Template

The POV character has a specific, clearly defined desire.

Filaurial is going to escape the palace where’s she’s bored out of her mind.

She has to outmaneuver her guard,  the palace guards, and her father.

She will stowaway on a boat, which is promptly attacked by pirates.

Failure to let your POV character reach his goal. All appears lost.

The palace guards chase her and corner her up in her room. Her father is called and talking to her “down,” while the guard is ready to beat the heavy door down.

Time passes, the hero reacts viscerally. He hurts, takes stock of his options.

She cries, she explains herself, she almost quits, but then she doesn’t, her pride and inspiration are triggered, and she begins to plan.

The POV character works through the choices, comes to the least bad option.

She’s drowning in luxury – and she will tie all the excessive linens and comfortable bedding together expertly, and makes a rope tall enough to fling from the palace window. She trains her bird to say, “No father I don’t understand, can you explain it again?” and she books it out of the window.

POV Character decides with a chance of success, has a new goal.

Climbing down the sheets, she realizes all her snacking has gotten her a little chubby, indeed, but she is so happy to be moving now, with. A goal.

She is exhilarated, a warrior princess after all, and she makes it down the palace tower and outside into the city, to the port, and onto a trade ship that’s departing.

There’s a chase scene. They are after her. She’s going to get caught.

The try to close the gates but the ship has made it out just in time.

A paragraph describing what the character sees. IT can be simple or it can be complex but it needs to be described not in the hero’s point of view but in a universal view, as through a camera.

The ship departs the majestic capital port to spread goods all over the world in an effort to re-establish trade with the people’s the Elven kingdom has lived apart from for a 1000 years. A feeling of hope, adventure and excitement bubbles around the air.

Filaurial panics for a moment as she’s aboard the ship…what was she thinking? She’s the heir to the Elven throne and the world’s best chance against the forces of darkness the Orc and Troll alliance has represented for 1000 years since they won the war of black roses. But she steels herself… she will rescue her mother, somehow. She will find allies and she will find a way.

She looks around, a last look at the Elven capital as she leaves, and feels the air in her hair, and smiles and feels free – until someone aboard the ship cries “Stowaway!”

An instinctive action that requires no conscious thought

She freezes, bolts to run, or jump off the ship, into the water. She looks down, calculating the fall.

The hero’s actions after he has had time to reflect.

She slowly turns around and greets the Captain.

* Not all of these are required but they must happen in this order to make the reader “be” your POV character.

So that’s just an example. I’m going to go give it a shot now, but I hope this helps with some of the elusive stuff most writers don’t talk about. Inspiration is the magic, and you need guts to stick your butt in your chair every day taking chances, but a structure is a key to knowing what you want before you get busy. Mega-successful authors like James Patterson won’t work without one, and like his style or not, he sells millions and millions of books he’s proud of.

I highly recommend you try this scene structure tip on your next project. If you like it or hate it, please drop me a line at kai@jorahkai.com, or on Scribophile at https://www.scribophile.com/authors/jorah-kai/