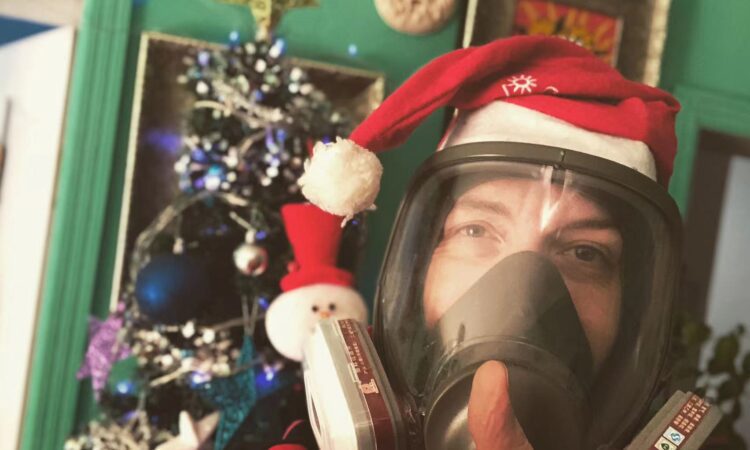 Christmas 2021 was nice and easy. The school gave me a day off, and we had a nice break. We took Ethan to Paradise walk for a hamburger feast at USA chain Lights burgers. That night, I got invited to the Chongqing’ Geezer’s Club,’ a group of senior writers and poets, and we had a fantastic feast, turkey, mashed potatoes, cranberry sauce, and the works. It was a lovely Christmas eve.

I guess as Chongqing’s youngest grandfather, I’m an honorary geezer. I mean, I’m thrilled to have attained this honorific so early in my life- I can hold this esteemed position for another half a century at least, with some luck and healthy living, let alone transhumanist scientific breakthroughs. I believe Yuval Noah Harari when he says they’re coming soon (in a BBC interview) if you save your pennies for a rainy day.

Speaking of Harari, one of the most brilliant nonfiction writers alive, I’m reading some ‘smart people’ books and classics over the winter, including ’21 lessons for the 21st Century’ (Harari), The Philosophy of Aristotle, and going to delve into the classics again, Homer’s Illiad and Oddessy, as I reread Aristotle’s Poetics. I think Plato’s Republic would be good for a revisit before I watch the Matrix 4 again, too. It is our next big theatrical release in China. It’s a good time for us here to contemplate philosophy and the meaning of life; what is real, and what matters? Plato’s ‘Allegory Of The Cave‘ is a theory put forward by Plato about human perception, claiming that knowledge gained through the senses is no more than opinion and that, in order to have real knowledge, we must gain it through philosophical reasoning. It goes hand in hand with simulation theory, “Forty years ago we had Pong – two rectangles and a dot,” said Elon Musk on the possibility of humans living the simulation theory. That’s where we were. Now 40 years later, we have photorealistic 3D simulations with millions of people playing simultaneously, and it’s getting better every year. The new installment revisits these seminal philosophical ideas and offers us an update that includes a meta-awareness of WB and HBOMax reviving old franchises to sell TV streaming subscriptions. I don’t know how the box office in China will do– there might not be a lot of brand recognition of the Matrix Trilogy, although Keanu Reeves is pretty popular, and I’m not sure how many people here read Plato, but I’ll be there opening weekend, and I’ll enjoy it all the same. I’ve heard it described as a story of self-affirmation, and we’ll go see it after I finish my last week of teaching this week to start my month-long Spring Festival Holiday, where I’ll be revising and editing Amos the Amazing for drafts #4 and #5.

Christmas Day, I got to spend with my close friends, and we had a nice hangout. I m grateful again for Chongqing and China’s reasonable, strict epidemic management that has given us more freedom than almost any other country in. the world once we earned it through collective effort and compliance with science-based guidelines.