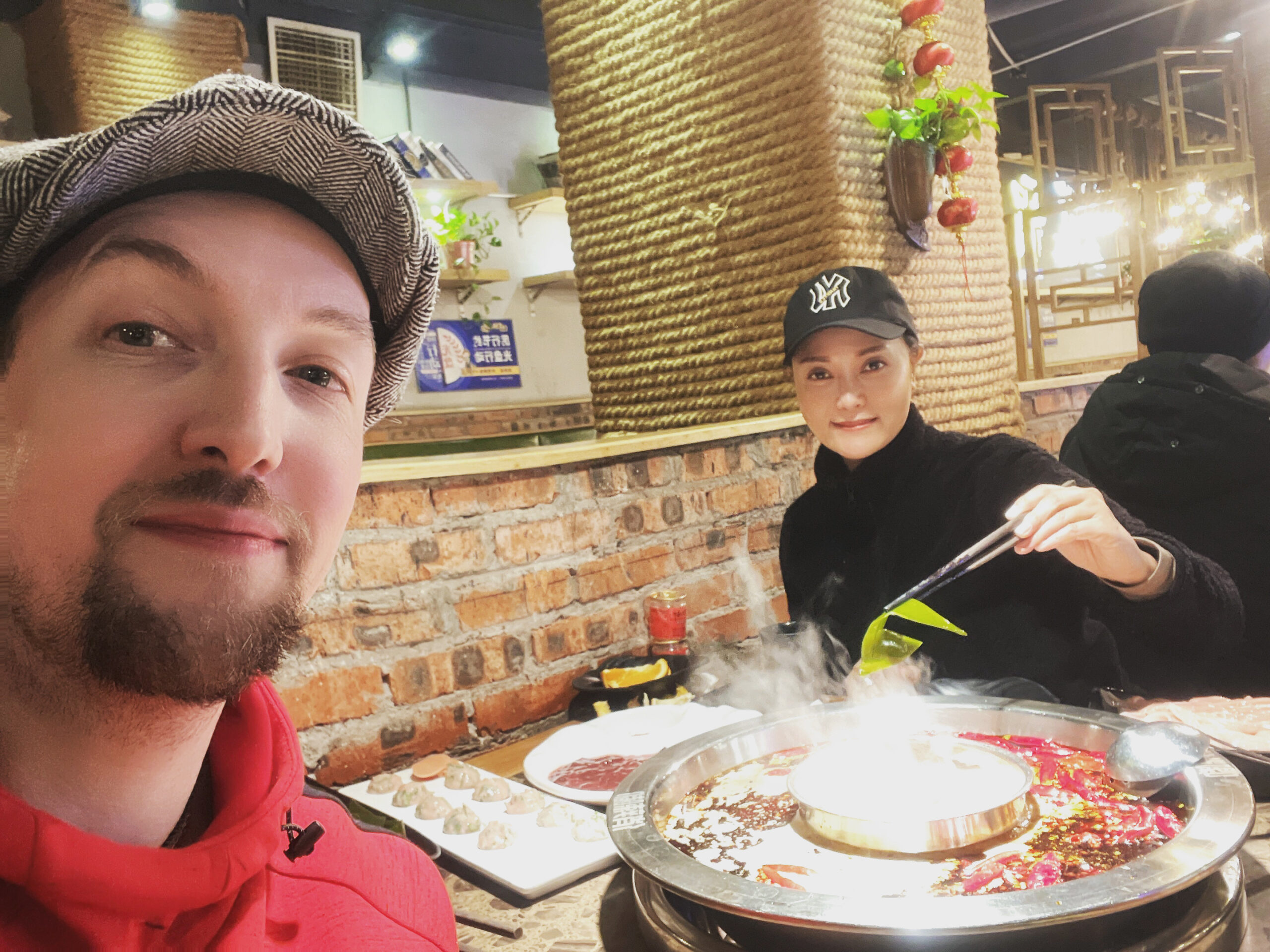 “It’s your outlook on life that counts. If you take yourself lately and don’t take yourself too seriously, pretty soon you can find the humor in our every day lives. And sometimes it can be a lifesaver.” — Betty White. (Rest in Peace)

Every day I’m buffering. I’m grateful, but I’m drawn thin- a man can only serve so many masters at once, doubly half, if he’s a proud one. I’m lucky in that the muse visits me frequently, but I’ve found it doesn’t go over well when in the middle of a nice, healthy lunch, I throw my chopsticks down and jump up out of my chair and run off into my office to open 4 notepads and 5 word documents and start pulling at my hair while I howl and groan. So instead, I must buffer. The idea must stay central in my mind, and as the wheel spins, the next three steps begin to spin also, open this document, make that change, and so on, and I must keep this present and central in my mind, lest I forget, lest the muse be offended. So the part of my mind that is mindful, central, and available to enjoy lunch with Xiaolin shrinks by the second, and as long as all I have to do is feed myself and smile, I should be fine. But then the clean-up comes, and I’m washing dishes and wiping counters, all the while my limited RAM is running out of space to keep track of the “open tabs” on my creative to-do list. Then something as simple as Xiaolin asking me to borrow the cloth that I’m presently using to wash a wok becomes confusing… you want to use this? But I’m using this… what will I use? my mind is too small–memory error— close some tabs to continue. She might say, can you wash this first, then give it to me, then be careful, you’re spilling water on the counter, then this– then that– The worst thing I would do was snarl and howl that my mind is full, and I can’t handle any more details without offending the muse and sending the divine gift of inspiration directly into the trash with no recover option. I’ve tried that before, and she looks at me like I’m mad or a deranged child. So I must keep cool and smile, with my ever-shrinking presence of mind, as I cradle the treasures of my idea until I can clear my plate, spring away, and get typing. The alternative is hellish: be a madman, divorced and alone, and hope at least the muse sticks around, or kiss my creativity goodbye and just be a normal, boring family man, without muses, without poems and books and burning inspiration. No, so I must juggle instead.

Here is what I recovered from today’s lunch, for example: Open the long term Amos files, create a book of local lore and fairy tales that can be explored, create a bardlike character that would travel around assembling these old oral tales, somewhere between Hans Christian Anderson or the Brothers Grimm, and a real monster hunter, a witcher. Make him enigmatic and interesting, and the book itself something cloaked in mystery, magic, and excitement. Come up with a name for the book. Open the working 3rd draft of Amos the Amazing book 1, find a way to tie the title in, perhaps quickly mention Amos stopping as his fingers dancing over the titles of the Abbey’s legendary old tomes, as something that catches his interest but he will return to later, the fans will enjoy having so many threads originating from the first tale, to play upon later. Make the bard the younger incarnation of the character XXXXXX (redacted: no spoilers), and then later you’ll be able to weave a book or maybe even a trilogy off his in-world adventures if you find the time and interest. Also, you should open the spreadsheets and maps and plot as many possible of these threads before you publish the first book. Learn from the errors of the HP series that internal consistency is one thing, but world-building and series-long ultimate consistency is important and will reward the super fans.

We had an outbreak in Xian. But it wasn’t as bad as it could have been – although if you read the western headlines, it was a lot worse. I often wonder if they really just miss the point of pandemic prevention, or they just like to make China look bad and sensationalize everything. Either way, it’s poor journalism and irresponsible.

So the story goes that lax regulations at a Xian COVID hotel caused a city-wide outbreak. China’s response was to put the 13 million-person city on lockdown as cases rose to more than 50 a day because we understand the power of exponential function and paid attention in science class. A week or so later, there were some rumors of food shortages, but the government assured the people it would supply necessary goods and asked people to stock up for the coming holiday. Cases peaked at 150 for a week in a row, made it 175, and then the effects of the lockdown began to work their magic, bringing cases down to below 100, with cases between 30-60 for the last couple of days. Hopefully, it will be stamped out and over soon.

These days, it just makes sense to have a month or two of dry goods on hand. Two years later, we still do. Water too. Supply chains in China have stayed rock steady, but it’s good for peace of mind to be a little bit independent. Xian’s lockdown has made cases peak at a daily high of 175, now down to below 150 for the first time in 7 days. It looks like the lockdown is choking off infection chains, and we will get a handle on it.

International news totally missed the point when they say “chaos in China” Reality: 150 cases a day in a city is alarming because we understand the exponential function. The fact my family is worried about me in a 34 million people city with 0 cases because 1000 KM away, there’s a city in lockdown over 150 cases a day while their province gets 20,000 new cases a day shows the power of media sensationalism and missing the point entirely. America is declaring a million (1.3) new cases a day, business as usual, but cries headlines of ‘China in Chaos’ when we lock a city down at 150 cases a day to get ahold of the outbreak. It’s wildly irresponsible. But hey, that’s nothing new, is it?

“America is declaring a million (1.3) new cases a day, business as usual, but cries headlines of ‘China in Chaos’ when we lock a city down at 150 cases a day to get ahold of the outbreak. It’s wildly irresponsible. But hey, that’s nothing new, is it?”

As we hoped, as I cautiously mused about last month, Omicron is pushing out the Delta variant. As we predicted from early data, Omicron is mild for the vaxxed but possibly deadly for the unvaxxed (including kids!) and a hospital clogger. Studies show it’s only 11% less deadly than Delta in unvaccinated people and much more contagious. Some experts have said the Rvalue is approximately 10- more than measles, practically double Delta, and 4X the original wild type at 2.4.

Things are bad in Canada, especially in Ontario and Quebec, where many Drs. in Quebec are forced to work in sick wards — sick! It’s that bad, my dad says. Well, if there are no doctors in hospitals, that’s worse, so perhaps it’s what has to be done. But the disease is changing– moving out of the lungs into the sinuses. Omicron symptoms are runny nose, sneezing, and a sore throat, and often people get better in 2-3 days if vaccinated and healthy. G eat news for everyone but big pharma who is still hoping to sell billions worth of covid medications. In Quebec, Premier Legault has instituted a premium “tax” for unvaccinated. “The unvaccinated “will have a bill to pay because there are consequences on our healthcare network and it’s not up to all Quebecers to pay for this,” he said. While controversial, I believe it’s coming two years too late. If we’d just taken it as seriously as China around the world from day 1, we’d probably have beaten COVID out and moved on by now.

New Year came and went quietly – we had invites to work parties and friends gatherings but stayed home. Xiaolin had been to her Aunt’s wake, and we were happy to relax and take it easy. I’ve been calm and collected over the holidays– Baileys in the milk helps to reduce stress and keep a smile on my face.