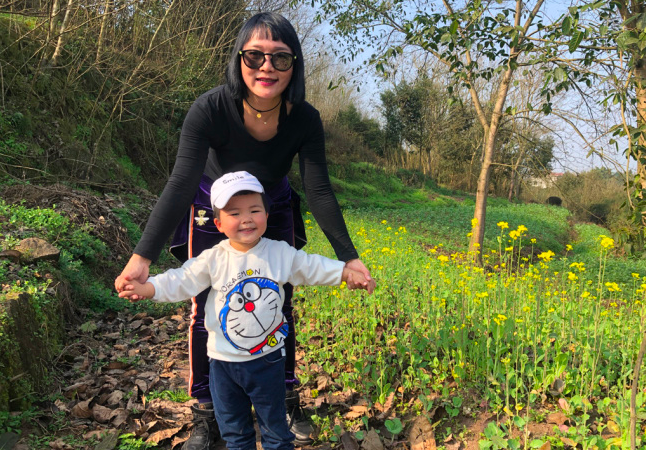 March 1 – Year of the Ox (Part 1: An Epilogue ) Paying Attention to Small Things

Somewhere in the vast darkness known as the great silence was a most remarkable thing. Although they were quite an arduous, wasteful, and inefficient lot, there was a conglomeration of atoms contemplating other atoms.

At one particularly trying point in space-time and having filled the bath with steaming water, I found myself testing it with a big toe. A bit on the hot side, but it was in the tolerable threshold. I took great care to ease my battered body in, noticing the blacks, purples, and blues of my bottom and left hip creeping into dark yellows up and down my legs. My cotton gauze bandage was crusted with dark-clotted blood. My heightened senses could taste tangy metal as the blood touched the water.

The road to knowledge, and then wisdom, began by paying attention to small things.

Day 395. “Tian Mao Jin Ling,” I call, Chinese for Space Cat Genie, and she answers, “Wo Zai,” (I’m here). “What day is it today?” I ask, and she tells me. It’s March 1, 2021. She lets me know the weather outside, gives me some news headlines, plays Waka Waka by Shakira to get me out of bed. I get up while she reads Shaolin a ghost story. I brush my teeth. It was well worth the 1 RMB (US 0.15), including shipping, an unbelievable price, to have her as our smart personal assistant. I don’t worry about privacy, even though she, Alexa, and Siri might always be listening. When you live in a country of 1.5 billion, there isn’t a lot of space for privacy, so I’ll settle for good health and comfort.

It’s been a surreally trying 14 months since the pandemic began here in China, psychologically grueling, but since the Spring Festival holiday and the Year of the Ox, I’ve known unparalleled peace, almost as if I’ve stepped outside of my mind and just am. This is the kind of thing kids, addicts, DJs, and drunks feel when they get off their face or out of their head, or monks feel after a lifetime of meditation practice and enlightenment. Which was my path? Perhaps, it was both, and I feel grateful to know both the short and long way there.

We pack our bags and head to the gym, but Shaolin’s forgotten her water. Outside the school gate, she grabs a bottle off the corner store shelf and smiles at the cash. It scans her face, automatically deducting 2 RMB (US 0.20) from her account. The human cashier behind the robotic face screen nods and smiles back before getting back to her mobile game. Many shops don’t bother with human cashiers anymore, but this one owns the place.

The news lately is exciting. Even though Trump got acquitted and there are many problems left to tackle, it feels like there are experts at the top in both East and West willing to try to solve the big problems, scientists working with leaders, to get the job done.

For decades, presidents have used their power to declare emergencies to sideline badly needed regulations and entrench the national security state. Now a group of Congress members led by AOC is proposing that those powers be used for good: to force action to avoid a climate catastrophe. Now, the Wonder Twins AOC and Bernie Sanders cowrite a bill asking the new Biden administration to declare a climate emergency. It would expand infrastructure, promote access to renewable energy, transportation, water, and public systems, modernize structures, invest in public health, prepare for extreme climate events, restore natural wildlife areas, invest in agriculture, and develop a transformation to clean energy. It feels like good news.

I look back at the year of the rat and think of the titans that have fallen: Bassnectar (superstar bass DJ turned accused manipulative predator), Johnny Depp (superstar actor accused abusive partner), Peter Nygaard (fashion guru turned accused billionaire pedophile with his own creepy private island of secrets), even an ex-pat teacher I knew (accused of predatory behavior), and now, Marilyn Manson (superstar goth clown turned accused abuser). My friend Ryan, who called me the Plague Harbinger a year ago, had some poignant words: “I really don’t understand how the Marilyn Manson allegations are shocking to anyone. He’s been advertising how (messed) up he is since day one. It’s his entire platform. So everyone just assumed that somehow also meant well adjusted for relationships and respectful to women? What I’m saying is that his entire persona was a walking red flag, and now everyone’s acting shocked and appalled by the recent revelations as if no one could have seen it coming. Like he was always such a fine upstanding young gentleman. The only thing that shocks me is how long it took for these accusations to come to light. How was no one talking about this before now? For those of you that were big fans, you can separate the art from the artist. Look at H.P. Lovecraft and J.K. Rowling. You can have creators with problematic views and still appreciate their work. Just don’t glorify the artist.” The internet has a hard time with nuance, but not you, Roy. I hope you take the time to soak it all in.

The #MeToo movement caught famous people by surprise, as entire cultures were deemed untenable overnight– especially in movies and music, where some people’s whole platform was “I’m famous, and I use people,” suddenly being called out as sleazy… kind of a hmm well yeah, duh moment. But it feels good to see bullies and abusers fall. Full stop.

I introduced a single friend to Shaolin’s single friend and they’re really hitting it off. It’s so cute to watch. We’ve been all to dinner twice and they’re overcoming language and cultural barriers to find a lot of mutual appreciation in common. It could have been much more awkward. Life is like a dance, fingers crossed.

It also feels like a good time to spend less time on the internet. With everyone looking for a fight with little to no provocation. I’ve taken a break, most of February, for Spring Festival. A break from writing, a break from hyper-focus on the pandemic and world news, and spent time with my family. It feels so good. I’ve taken whole days away from my phone, social media, and I decided not to argue anymore. We’ve had days of 25 and sunny in February, and went to the river to play with Ethan and the family, and gone up to a mountain to walk around, holding hands with Shaolin and smiling until I could feel my face burning in the hot sun. It’s been weeks since I argued on the internet for any reason. It’s hard to remember the way I waged wars and endless fights and debates in 2020—- I can’t even remember why I’d bother. Who was I trying to teach? What was I trying to win?

“We’re very happy,” Shaolin said sweetly, in a quiet moment, “when you stay here, everything is so good.” She hugs me and says, “Kai Kai,” with affection, and it feels good to be in the present and not fighting all the time. To just both feel happy and peaceful. It feels like the end of a life of struggle, but I am still curious about what is to come.

Democrats are working to push through USD 50,000 of student loan forgiveness and a stimulus plan to put cash into hands and just passed a 1.9 trillion USD covid-19 relief package – thanks to the selfish and corrupt republican majority and administration’s defeat, help is coming in America. They need it. Some of this will begin to look like universal basic income, I think, and good.

“Oh, look at you. You’re keen to be clean,” said my nurse, bleach-blond, dark-eyed, in a white latex nurse uniform. She smiles, played with my matted hair, administered my medication– scattershot right into my foggy grey brain.

Unwrapping the bandage from my hip, I see twenty-five thick, surgical staples holding my leg together shone from the bottom of the tub like the promise of buried treasure.

What is valuable, or were they insignificant? Both?

I used to sit in the bathtub as a child, with the shower on, and listen to the water, sometimes with the lights off and pretend I was in the rainforest surrounded by the vibrant pulse of wildlife until I came out boiled and red as a lobster.

“We will teach you to walk again.” Like honey pouring into my ears but farther and farther away as the words dripped into the stout victorian bathtub, an alphabet soup shrinking as it disappears down the drain, coated with a crystalline prescience. Time was stretchy now, all happening, everywhere. When the Universe was together, it was both all-time and outside of time. You can’t be late when you’re the Universe.

Kai has been writing about the pandemic since January 20, 2020, on CTV News and iChongqing and his first pandemic diary is available on Amazon. He’s currently writing another nonfiction book about the changing post-pandemic landscape, and it’s called Year of the Rat, and several fictional novels. You can read more about them here.